Kalbarri has suffered widespread damage in the wake of ex-tropical cyclone Seroja, which tore across the midwest coast overnight.

Seroja made landfall south of the town, about 8pm on Sunday, as a category three storm with wind gusts up to 170km/h.

The cyclone brought rainy weather to Mandurah with 16.2mm falling in the early hours of Sunday morning and 37.4mm falling between lunch on Sunday and now.

A strong cold front is still bringing gusty winds and rain to Mandurah. 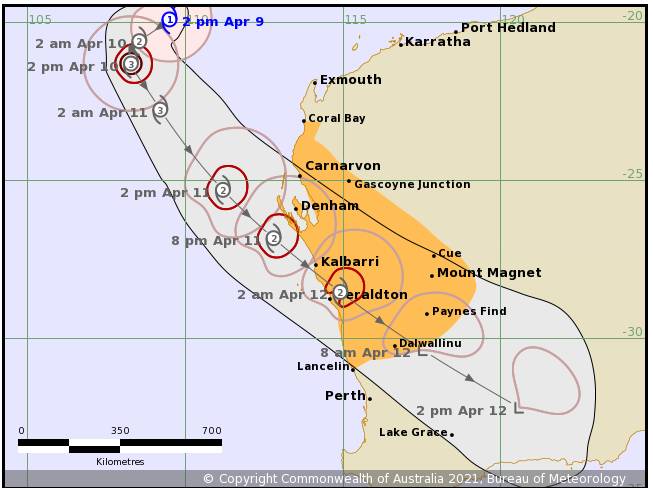 Seroja is forecast to make landfall on Sunday afternoon as a Category 2 cyclone, packing destructive winds with gusts of up to 150km/h at its centre as it hits between Geraldton and Denham.

While Mandurah will not be directly impacted by the system, it will feel associated effects.

The winds are expected to become light by the evening.

The wet weather is set to continue into Monday with a 90 per cent chance of rain in the morning.

Winds up to 35km/h are also predicted.

With the Pinjarra Races, Fairbridge Festival, and Action Sports Games on this weekend, the Mail will be updating how weather warnings will impact events set to take place over the affected period.

All events are currently proceeding as planned but due to the forecast rain, Daren Reid and the Soul City will not be entertaining after the last race at the Pinjarra Cup.

It is forecast to hit the coast between Carnarvon and Jurien Bay late on Sunday or early Monday.

Gales with gusts up to 100 km an hour are likely between Coral Bay and Kalbarri on Sunday, with destructive winds up to 150km to closer to the centre of the cyclone as it moves across the coast.

Heavy rain and flash flooding are predicted in the wake of Seroja, with an initial flood watch issued for the Wooramel, Murchison and Greenough River catchments. 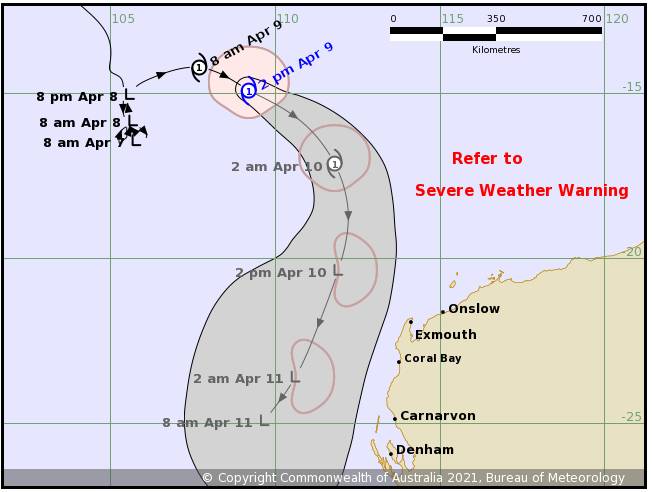 SECOND CYCLONE: Odette is expected to weaken over the weekend, as this forecast at 2.55pm on Friday shows. Image: BoM

Up to 150mm is expected to fall in some areas on Sunday and into Monday.

A blue alert has been issued for an area south of Coral Bay to Geraldton, with residents told to organise an emergency kit including first aid materials, torch, portable radio, spare batteries, food and water.

Tropical Cyclone Odette, also currently a Category 1 system, is estimated to be 940 kilometres north northwest of Exmouth and 620 kilometres southeast of Christmas Island.

It is likely to weaken below tropical cyclone intensity before passing to the west of the Pilbara, however the risk will remain of damaging winds and rain between Exmouth and Coral Bay during Saturday afternoon and evening. A severe weather warning is in place for the west Pilbara and northwest Gascoyne. 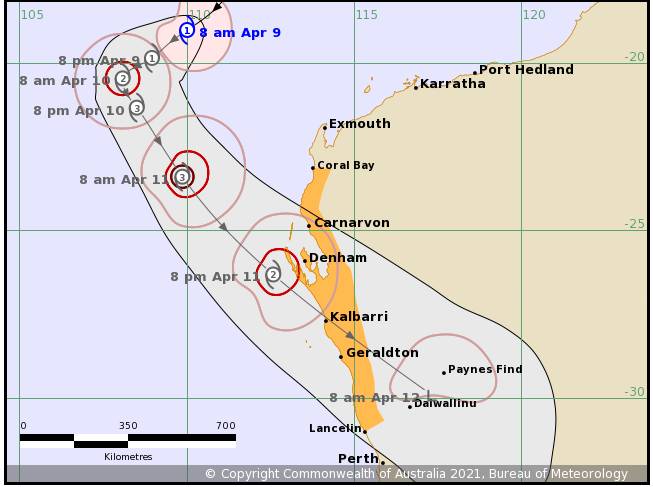 Earlier: Tropical Cyclone Seroja is tracking southwest at 23km/h and was 525km northwest of Exmouth in the early hours of Friday.

It is expected to make landfall late Sunday or early Monday between Carnarvon and Jurien Bay.

A second cyclone, named Tropical Cyclone Odette, has formed to the north-west of Tropical Cyclone Seroja and is currently a Category One system. It is expected to be a short-lived system which will weaken as it interacts with Seroja during the weekend.

Tropical Cyclone Seroja is set to bring heavy rain and strong winds to the Peel region with the stormy weather expected to hit on Sunday night.

A representative from DFES told the Mail while Mandurah will not be directly impacted by the system, it will feel associated effects.

"There will be a cloudband that will produce moderate to heavy rainfall on the southern side of the cyclone system," the spokesperson said. 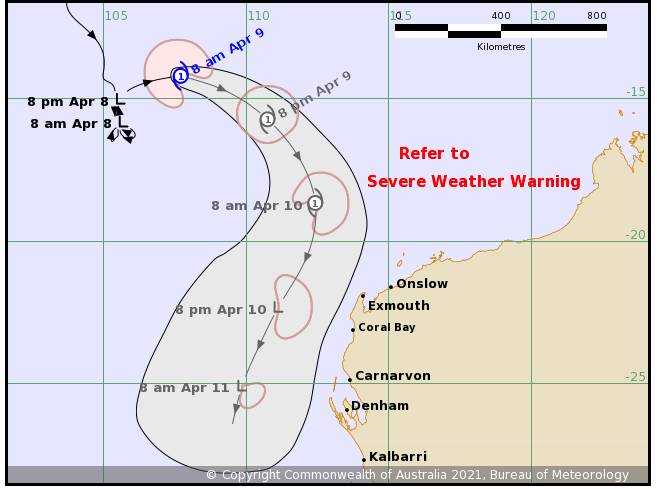 On Sunday there is an 80 per cent chance of rain and winds expected to reach up to 30km/h.

On Monday the rain is set to continue with a 90 per cent chance of rain and winds getting up to 40km/h.

With the Pinjarra Races, Fairbridge Festival, and Action Sports Games on this weekend, the Mail will be updating how weather warnings will impact events set to take place over the affected period.

DFES has warned cyclones can be extremely dangerous, and the impacts can include heavy rain that leads to flooding, gales and ocean swells. They urge anyone in high-risk areas to take advantage of their cyclone preparation resources.

Bureau of Meteorology senior meteorologist Luke Huntington said the time the south west is expected to experience the effects will depend on when the systems cross paths.

"If it takes the northerly coast it will be on Sunday, if it crosses further south it will occur more on Monday morning," Mr Huntington said.

Mr Huntington also stressed it was important to take advice and preparations seriously, as this kind of weather is not typical for WA.