More than 300 million years ago, long before dinosaurs, the world was ruled by fish.

The Devonian Period was an important chapter in the history of life. It's when eyes, ears and noses developed and the brain became more complex. We know all this from studying fossils, and a major cache of Devonian specimens came from our own backyard.

In 1955 just outside Canowindra, in Central West NSW, a road worker came across the first fish fossil slab.

Local Bruce Loomes had just been starting school when that slab was found. He remembers the headmaster used a plaster cast of the fossil as a doorstop.

When we got in a strife, of course, we used to give it a kick

What followed were decades of unexplored potential. This is the story of a major historic discovery that was just as soon forgotten, until now. 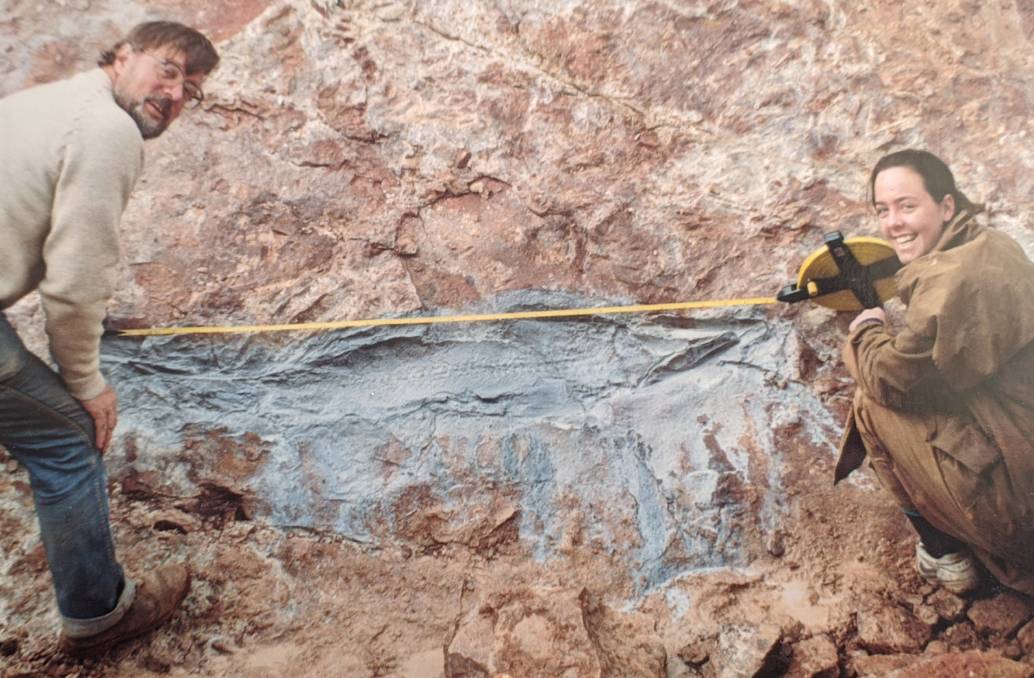 Dr Alex Ritchie, left, had just 10 days for an exploratory dig in Canowindra in 1993. Picture: Supplied.

Years passed before Canowindra could get the attention of the scientific community again. In the 1990s Scottish palaeontologist Dr Alex Ritchie, who had an academic stake in Devonian fish, took an interest. He began talks with Cabonne Council, and in July 1993 was given 10 days for an exploratory dig. 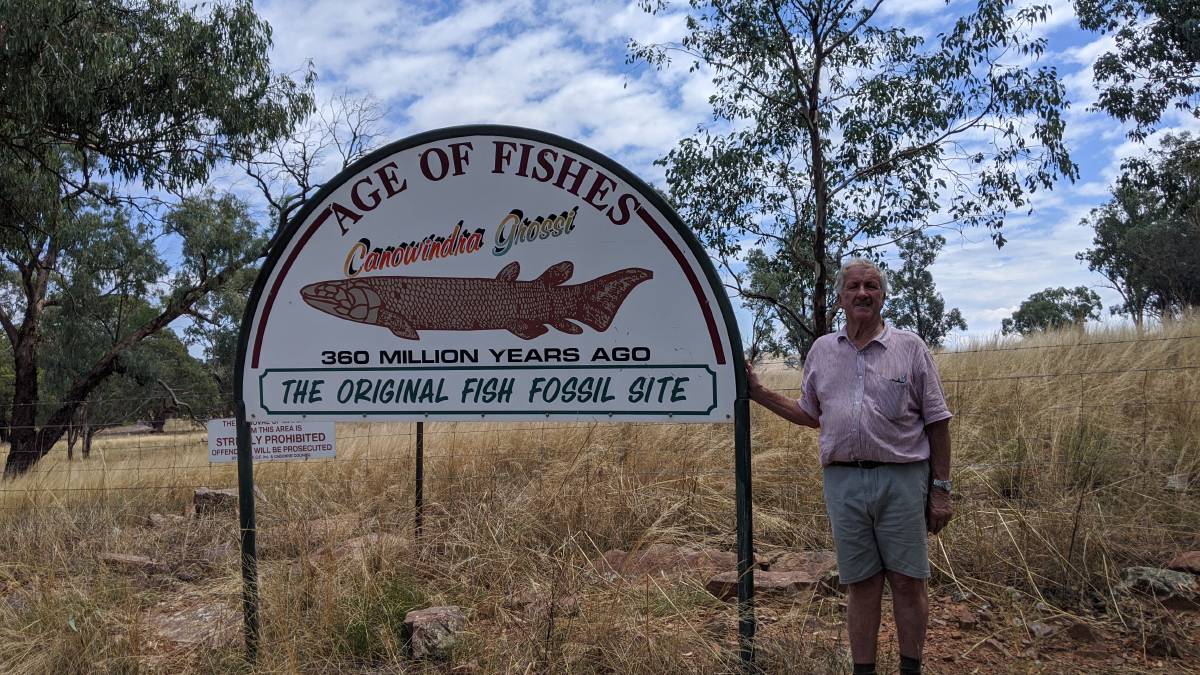 Dig foreman Bruce Loomes had a fish named after him, the Gooloogongia Loomesi. Picture: Laura Corrigan.

"We all just chipped in as a whole community, and everybody in town really got behind it," Bruce said.

Dr Alex Ritchie chose Bruce as foreman because he knew people, and he got things done.

The 1993 dig site was essentially a nature strip between a public road and a sheep farm's fence. Dr Ritchie and Bruce applied to council to dig under the road, but with only 10 days for the dig they couldn't wait.

Discreetly they dug under the road and patched it over again. The following day the council's engineer Don Dean came to tell them he'd have the paperwork tomorrow.

"And I said, 'Oh that'll be good'. I turned away because I was busting. Alex looked at me and I winked and told him to clear off. Deany's there and I just couldn't hold on anymore. He's come around and looked at me 'Oh you bastards I don't want to know anything about it," Bruce recalled. 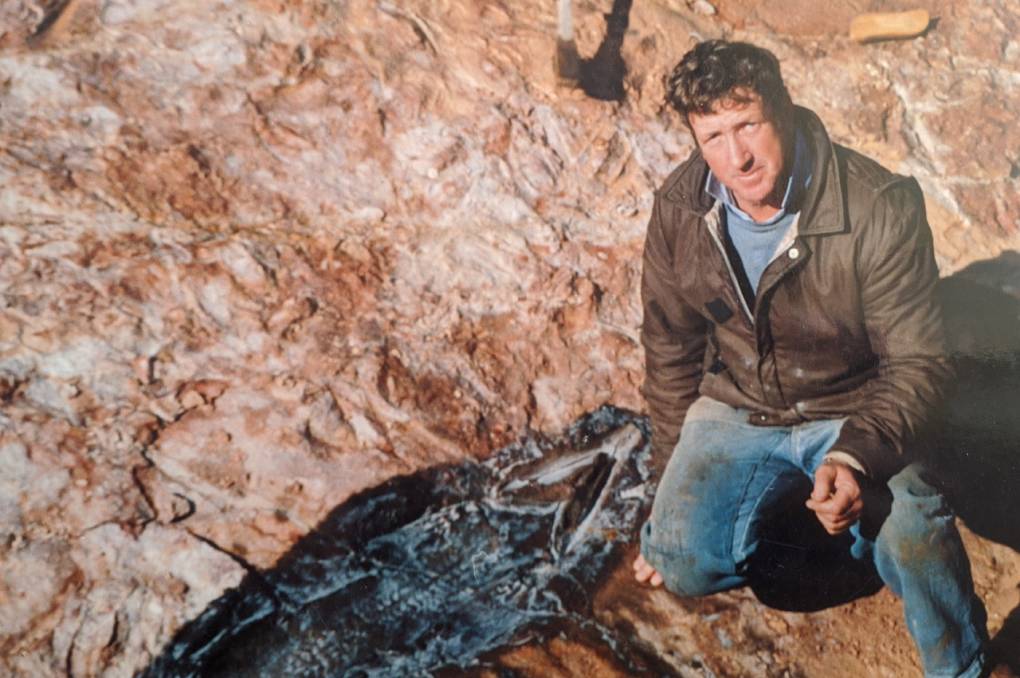 Bruce Loomes in 1993 at the original dig site. Picture: Supplied.

Angela Breen had been in year 10 at St Edwards Catholic college in 1993. Despite having tonsillitis and the flu she was eager to help with the dig.

"My parents certainly encouraged me to go out. It was an opportunity not to be missed. In today's world I probably wouldn't have been allowed anywhere near anybody," she said.

The students helped clean and prepare the 80 tonnes of excavated fossil slabs that were kept on pallets in a nearby paddock.

I think any day away from the classroom is a good day.

Aside from students, fossil enthusiasts could pay to help out, sorting slabs after the dig. Monica Yeung of Gondwana Dreaming organised the tours.

"Sometimes it got a bit tiring to go up there every month. But inevitably, whenever we ended up coming together on Friday night at the pub, and Alex arrived, all these tired thoughts just disappeared because Alex had so much enthusiasm." 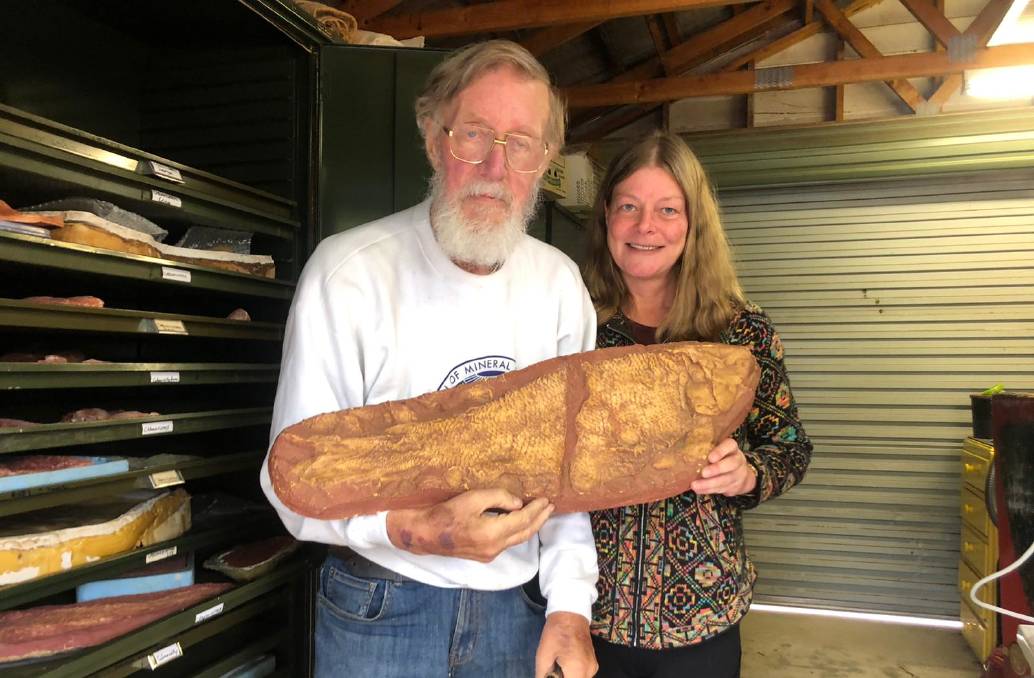 A major find at the site was Groenlandaspis, a 50cm armoured fish. Dr Ritchie had encountered the fish in Antarctica. It's also been found in Greenland. Finding it in Australia proved the continents were once connected.

Monica recalls the moment Alex spotted it in Canowindra.

"He suddenly started to jump around, and it happened to be in a spot where I'd been told there was a big brown snake. He was yelling and screaming. I kept trying to tell him to sit down because I thought he'd been bitten," she said.

Money raised by Monica's tours helped fund the construction of Age of Fishes Museum in Canowindra, one of only two Devonian museums in the world. The most important fossils are on display there.

What had been uncovered was an ancient billabong where fresh water fish died and became buried in sediment, quickly, keeping them well preserved. Specimens included fish with lungs and fish with five finger limbs. These were fish getting ready to get out of the water. Maybe some of them would've. 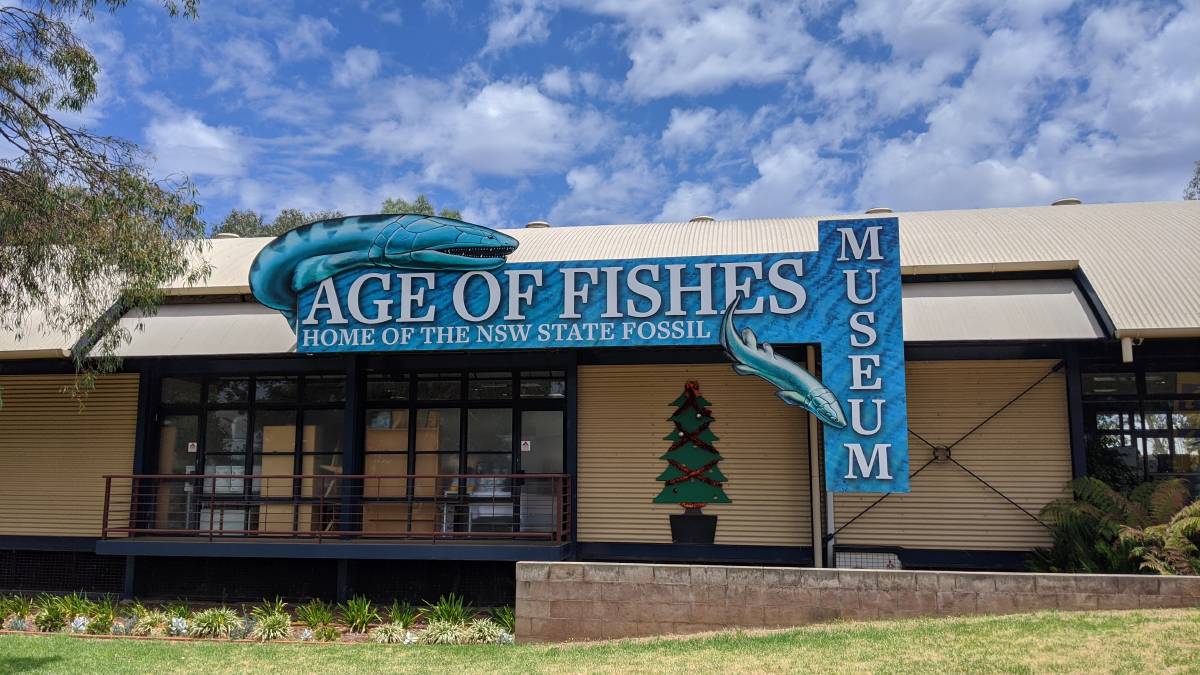 The most important Canowindra fossils are on display at Age of Fishes Museum in town. Picture: Laura Corrigan.

Dr Ritchie had only scratched the surface. In just 10 days with few resources Canowindra's fossils contributed greatly to science. At the end of his time Dr Ritchie placed a plastic sheet over one of the most complete fish fossils ever found, then reburied them for a future date that never arrived.

"What we should have done is given it to the nation, roofed it, put a gate in it and then charged entry for people to come see this thing undercover, protected forever," said Dr Ritchie.

Dr Ritchie believes the site should've been made national heritage and converted into an onsite museum and research facility. It's something Sir David Attenborough agreed with after he visited in 2013. He called the fossils "world class" because they are so complete.

Instead, most slabs were stored at Canowindra showground, neglected for decades, the dig buried.

I still think it's one of the greatest fossil sites of its kind anywhere in the world, but it seems sort of ignored or laughed at.

In 2019, Age of Fishes Museum built a temperature-controlled storage shed for the slabs. Cabonne council gifted the fossils to the Australian Museum that year and in 2020 it made 3D scans of each slab. The 200 slabs and 4000 fish are now available for scientists across the globe to study. But there's more to learn from what's still underground. 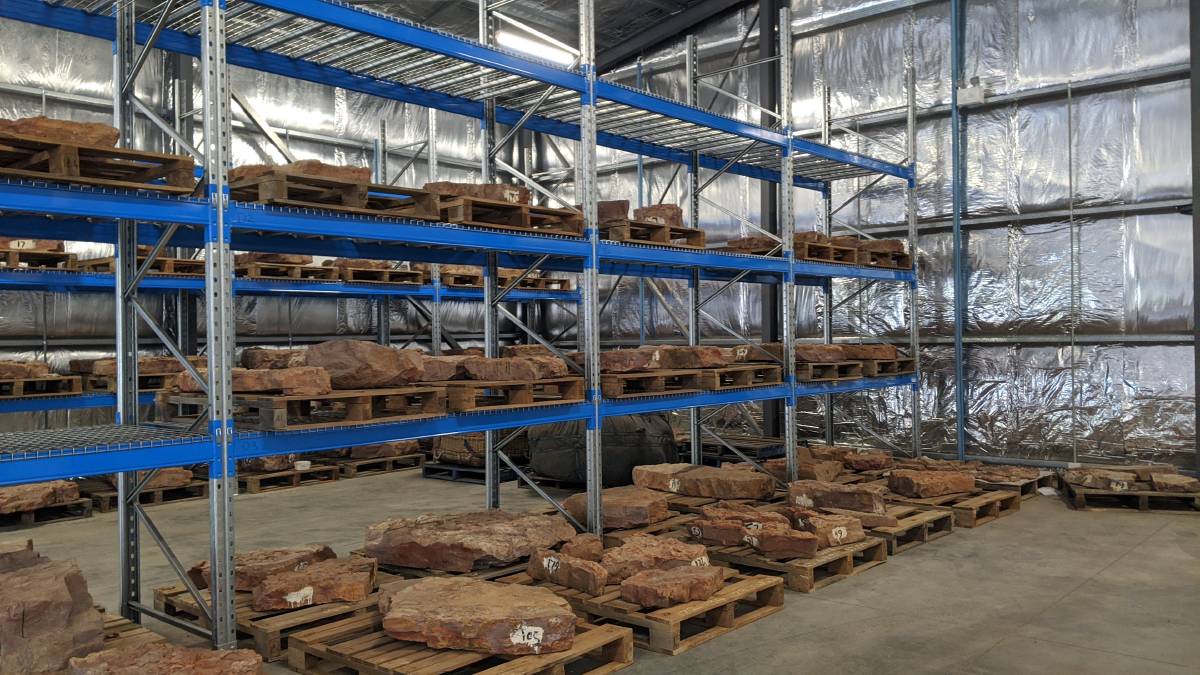 The majority of the 200 slabs, 80 tonnes of rock, are now stored in a temperature-controlled storage facility at the museum. Picture: Laura Corrigan.

Dr Ritchie and others believe the first tetrapod, or walking fish, in the Southern Hemisphere is waiting to be found in Canowindra.

Why hasn't the site been reopened like Dr Ritchie wanted? Everyone I spoke to responded "money". Rediscovering the site means diverting the road and taking over private land.

"I don't think we've valued science as much as we should have in Australia," said Anne Clark, Age of Fishes Museum manager.

"Also in regional areas you've got a smaller population and money has to be spread further," she said.

The then owners of the land adjacent to Dr Ritchie's dig weren't interested in fossils. Their interests lay in their agricultural livelihood.

But now that land, a property of 100 hectares on Fish Fossil Drive, has been sold. The buyer, Dr David McGrath, is a spine physician from Canberra looking to retire. He had visited Canowindra on one of Monica's tours. "My plan is to move this site forward, for educational purposes. This is a major fossil location in Australia. It's right up there with major fossil finds in the world actually. And yet its educational value has not been properly explored," David said.

It took an individual with a passing interest in palaeontology for the forgotten fossils to finally get the attention experts insist they deserve.

Here it is in our backyard, this important site. It shouldn't be buried forever.

David's in talks with the Canowindra community and the museums to determine how best to reopen the site for research and tourism.

Dr Ritchie, who's 85-years-old and living with dementia, said he hopes to live to see the site reopened.

"There's nothing else like it in the world, at this scale. It has the potential to draw hundreds of thousands of people," Dr Ritchie said.

Listen to the full story on our podcast. Search Voice of Real Australia in Apple Podcasts, Spotify or wherever you listen. Or press play on the webplayer above.