Julia Gillard once joked that she looked forward to being the answer to a trivia question, and that one day the answer would be hard to come by.

You can imagine it - a table of friends sitting at pub trivia and arguing over the answer of just who Australia's first female prime minister was.

One member of the team will say "Was it Gillard?" Another will say disagree and suggest the name of another female prime minister, believing her to be the first. More names will be put forward and argued about, because in this fantasy there have been so many women prime ministers, it's hard to remember in which order they came.

Eventually an answer will be submitted and of course any team that didn't write down the name of Julia Eileen Gillard will be kicking themselves.

What did Julia do next?

While Gillard will always be the first female prime minister of Australia, she certainly doesn't want to be the only, and one of the many projects she has taken on since leaving politics has been finding ways to learn more about and encourage women into leadership roles.

In the seven years since vacating the halls of power in Canberra, Gillard has held various positions, and is currently chair of the Global Partnership for Education, chair of Beyond Blue and inaugural chair of the Global Institute for Women's Leadership at Kings College in London, an organisation she helped found.

Now her project to encourage and increase the number of women in the highest offices of the world has taken the form of a new book, Women and Leadership, co-written with former Nigerian finance minister Ngozi Okonjo-Iweala.

In a series of interviews with current and former female leaders from around the world, backed up with the research about gender stereotypes and discrimination, Gillard and Okonjo-Iweala seek to document the experiences of women in politics around the world and develop lessons for women and men in politics and the media that cover them. 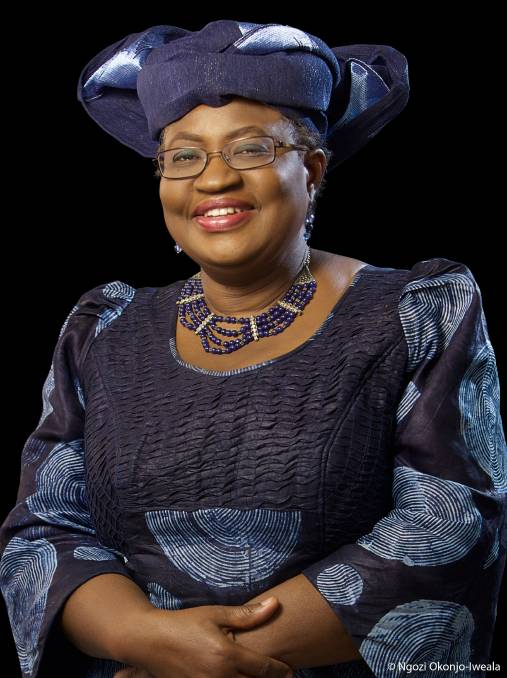 Through the interviews with world leaders like former British prime minister Theresa May, Norwegian Prime Minister Erna Solberg, and New Zealand Prime Minister Jacinda Ardern, a picture is painted of the challenges that hold true for women no matter what leadership role and what culture, as well as some they disagree on.

"It's truly a global book," Gillard says, with household names across western countries like former US presidential candidate Hillary Clinton's experiences detailed alongside those of women who would be lesser known in Australia. Former Chilean president Michelle Bachelet and former president of Malawi Joyce Banda are women who overcame exile and domestic violence to forge their careers.

There's no doubt that Gillard faced sexism during her time in the top job. The "ditch the witch" sign. Alan Jones saying he'd like to put her in a chaff bag and "throw her out to sea". Being called a bitch. "Deliberately barren". The list goes on.

One thing the book has provided for Gillard is confirmation that the gendered treatment she experienced wasn't just her. She laughs when I asks if that's a comforting thought, even all these years later.

Throughout the book, Gillard and Okonjo-Iweala test a series of hypotheses with the female leaders they interview, in order to not only chart the experience of women leaders, but to show the ways women can be ready for those experiences and improve them.

The value of female leadership has been debated in recent months as part of the comparisons between different countries' response to the coronavirus pandemic, with some leaders, like interviewees Ardern and Solberg, praised for the way they have handled the pandemic.

But for Gillard, success for women in leadership isn't about being considered better than men, or about women being praised for being more empathetic or inclusive.

"Amongst the leaders that come through in that gender-equal world there might be a tough, strong, brook-no-opposition female leader and there might be an empathetic caring nurturing male leader, because gender equality will mean we're no longer stereotyping certain characteristics as belonging to people of a particular gender."

That doesn't mean Gillard is saying she doesn't value the traits that are being celebrated in leaders like Ardern, whose empathy and care for the families who lost loved ones in the Christchurch massacre caught worldwide attention.

"If in that future world people say the leadership style they like the best comes with warmth and empathy, then obviously I think that would be a good thing, but that would mean they look for that warmth and empathy in all leaders, male and female, not just putting that as an extra requirement on women leaders." Jacinda Adern was praised for the compassion she displayed when dealing with the Christchurch massacre. Picture: Getty Images

In the current unequal world, however, women and men who step outside the stereotypes assigned to their gender are punished for it.

"The research does show that women and men pay a price for acting outside gender norms and to get to true equality we certainly have to shed that.

"If we're all honest with ourselves we are the product of our cultures and societies and socialisation and that means we do have gender stereotypes that whisper to us in the back of our brain and influence how we see and judge people."

While it's a book about political leadership, many of the experiences of the women within its pages will resonate with those trying to break new ground for women in other fields.

Moving on from just breaking through glass ceilings, Gillard and Okonjo-Iweala describe the glass labyrinth, as well as the glass cliff. The labyrinth describes the obstacles that face women as they seek to make their way up, that can be harder to name and combat than a simple ceiling.

The glass cliff describes a tendency for women to be brought in to lead companies that were already in crisis, setting them up to be seen as failures.

Is it worth it?

Parts of the book are disheartening, and at times a reader can be forgiven for asking why anyone would put themselves through what these women have, only to be threatened, judged on their appearance, told they are stepping out of line. 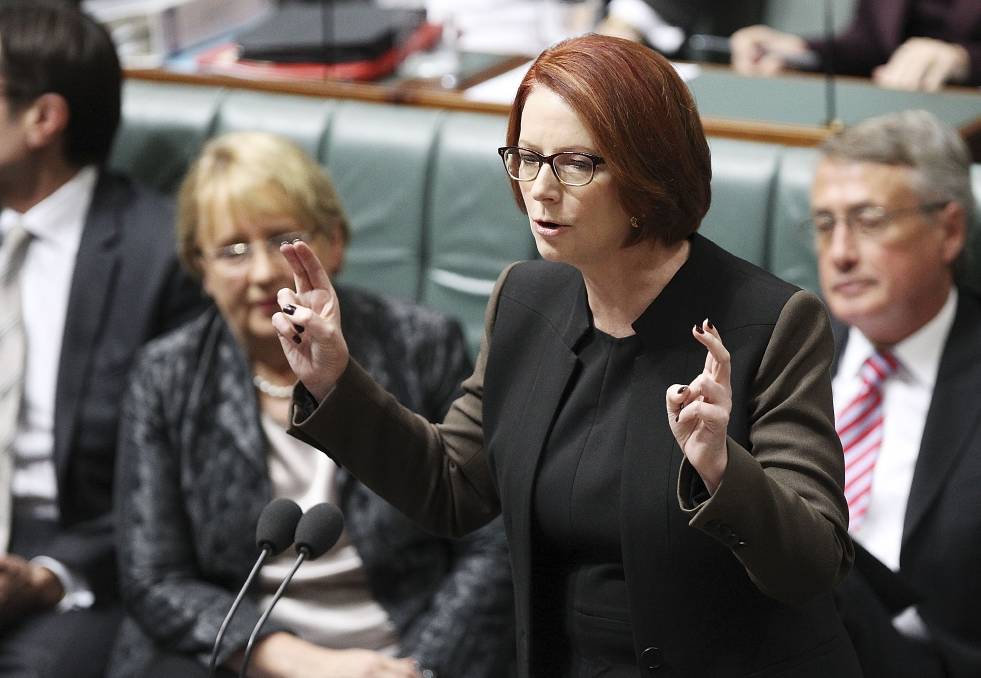 But Gillard is adamant the book is not about discouraging women from seeking a career in the brutal world of politics.

"First and foremost, I'd say to both men and women politics isn't for everyone!"

Australia's question time is seen as one of the most boisterous and adversarial in democratic systems, and while Gillard thrived in that environment, she acknowledges that it isn't for everyone.

"You wont survive in politics unless you have a driving sense of purpose, because it's hard, and unless you really know what you're there for and what you're striving to do," she says.

Those considering a career in the halls of power need to find what drives them and "hold onto it in the toughest of days". 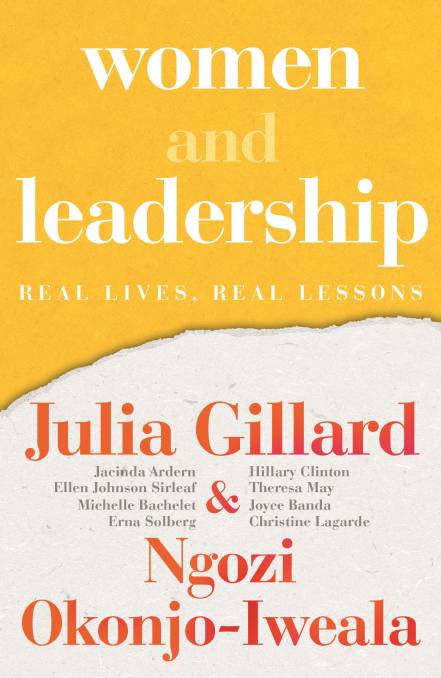 The book released this week.

"The more women who go into it the more we have this conversation about gender and politics, the lesser proportion over time that ugly gender experience should be."

Who will be next?

If we were to start suggesting names that might soon join Gillard's in the list of female prime ministers of Australia, looking at the current leadership of the major parties doesn't spark hope, with men in the leader and deputy leader roles.

During the last battle for the leadership of the Labor party, former deputy leader Tanya Plibersek counted herself out of the race, citing the time it would take away from her family.

Despite that, Gillard says she is an optimist though for the Labor side, and believes the work is already being done in ensuring there are enough women in the pipeline.

"We have almost equalised the number of men and women in labor caucuses, whether that's in national parliament or state parliaments, once you get there you tend to equalise who's in the cabinet and then you've got a deep starting class of women who could get through for leadership."

In the book, Gillard discusses the illusion of scarcity - that women must fight off other women for the few roles that could be filled by women.

It's just one of many illusions that need to be broken down for equality to take over, she says.

This story Heart of glass: How Julia Gillard kept smashing on through first appeared on The Canberra Times.