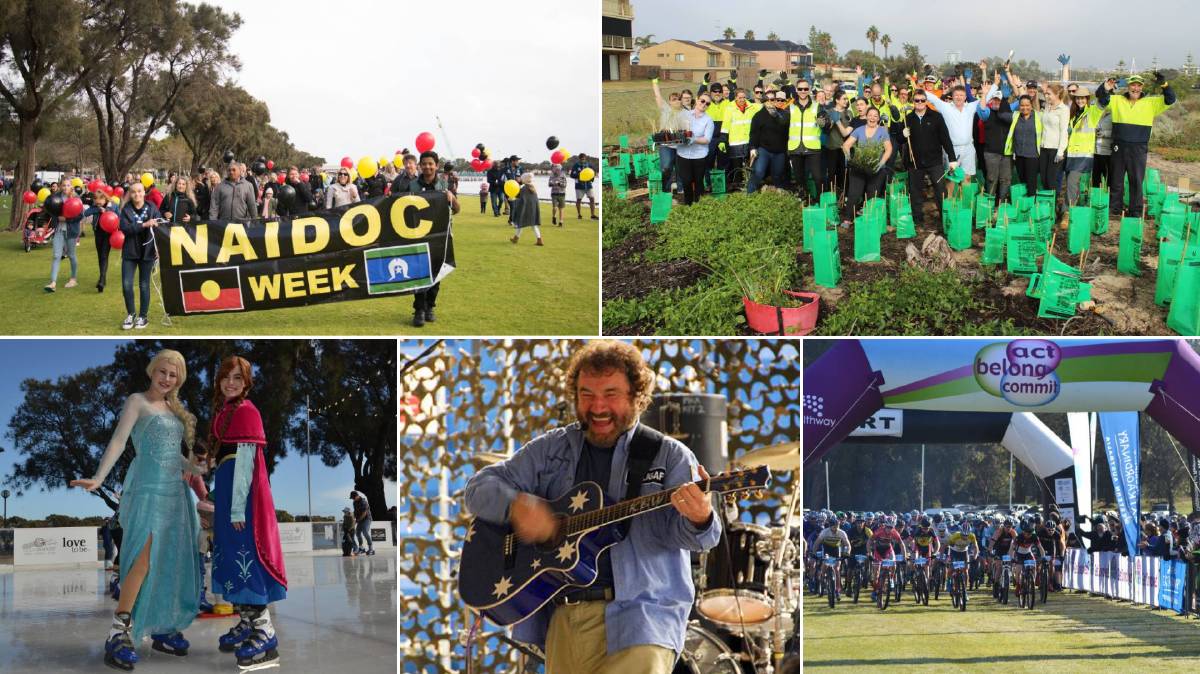 Shake off those winter blues because there is plenty in store for the third quarter of 2019 in the Peel region!

To help Mandurah Mail readers decide what to attend this July, August and September, we've collated the ultimate entertainment guide for all the major events, exciting festivals and impressive performances headed to Mandurah soon.

Make sure to pen them into your diary so you don't miss out on all the action!

Now in its third year, the winter-themed mini festival offers attendees a real ice-skating experience in an authentic and fully undercover rink, bigger than last year and suitable for all abilities.

If skating isn't your cup of tea, take a slide down the Runway on a snow tube for the ice ride of your life, ava-launch yourself down the Powder Peak inflatable slide and get some air or bounce around in the Cloud Castle jumping castle.

After working up an appetite, there will be plenty of delicious food and drinks on offer alongside the rink at Flic's Kitchen's Cabin Bar. With all the winter warmers you could possibly desire, the Bar will also host a number of fun events including comedy nights and drag queen performances throughout the festival.

For a full program, or to purchase tickets, visit the Skating At website.

Secret Sounds of the City

Brave the cold, rug up and take a step outside the ordinary this winter for the Secret Sounds of the City - an intimate night out in Mandurah.

Held every second Tuesday throughout July and August, starting on July 2, the event will be hosted by a number of local artists at five top secret venues.

The aim of the event is to offer community members the chance to visit a lesser-known venue they wouldn't normally go to and work with local artists paired with amazing food and drink.

Entry is by pre-sale only and limited tickets are available for each event with the details of the venue released to attendees on the day of the event. To purchase tickets, visit the Eventbrite website.

Premier Perth Beatles tribute band, The FabFour Australia, will take over the OBG for an exclusive Beatles Tribute night.

Featuring all the best hits from the English rock band, there will also be Beatles-inspired cocktails and classic UK foods available on the night.

For more information, or to book a table, visit the Facebook event page.

Picking up where The Rat Pack left off, The Tap Pack is coming to town, putting a modern twist on the crooners and artists from the 50s, right through to the noughties.

They sing, they dance, they joke and they bring a new, invigorating energy to a timeless style.

Christmas in July at the Trots

Celebrate the festive season early with family and friends at the Christmas in July - Trots night.

Tickets include a roast meal with all the trimmings, a desert selection, a drink on arrival, mystery bet and a ticket into the door prize.

Local duo BEST FRIENDS will perform live and there will be TAB and bar facilities, in-house raffles and competitions and Gloucester Park televised live.

Bookings are essential by calling 9531 1941 or email pinjtrots@westnet.com.au. For more information, visit the Shire of Murray website.

Gather the girls for a catch-up and a good gossip to enjoy much needed 'you' time.

Not only will there be a delicious sweet and savoury afternoon tea featuring sandwiches, tarts and scones, but there will also be cocktails.

Enjoy endless mimosas for the perfect weekend celebration or indulgence.

For more information, or to purchase tickets, visit the Facebook event page.

A national institution and Australia's most unique international comedy star, Kevin Bloody Wilson will take to the stage in Mandurah for a raucous night out.

After the release of his recent biography DILLIGAF, The Life And Rhymes Of Kevin Bloody Wilson, the performer is touring the country to indulge in his love of live shows and bring his politically incorrect humour to his fans.

The show is strictly for adults only. For more information, or to purchase tickets to the F.U.P.C show, visit the MPAC website.

Head down to the youth centre to join the NAIDOC celebrations.

There will be free food, basketball and pool competitions and a workshop from premier Indigenous comedy star Kevin Kropinyeri.

For more information, visit the City of Mandurah website.

The Bindjareb Art Awards will be on display in the Mandurah Performing Arts Centre from June 27-July 21 but the official opening presentation will be held on Monday, July 8 followed by NAIDOC celebrations.

An exhibition of invited contemporary Nyungar artists, the showcase presents culturally significant artworks that reflect the world's oldest living culture and recognise the contribution made by Indigenous artists.

This is an exhibition of new works created specifically for the 2019 Bindjareb Art awards that contributes to a growing Nyungar art collection for the City of Mandurah. For more information, visit the MPAC website.

Have you been naughty or nice so far this year?

Head to Bar Therapy for some early Christmas celebrations and a night of fun, good food, cheap drinks and music from a DJ playing inside, away from the cold, all night.

Wine and Design with James Walker

With a little help of a wine or two, be guided in creating your own masterpiece from local artist and educator James Walker.

No experience is necessary and all materials will be provided, plus take your artwork home after the event.

Tickets include your first drink and there will be food specials available on the night. For more information, visit the Facebook event page.

Join Ian, Grant and Chris from the Jarrah Celts band in a traditional Scottish acoustic session.

Bring an acoustic instrument, or just yourself, to join in the singing and playing.

Join Frasers Property and the City of Mandurah this National Tree Day and plant a tree to help preserve and protect pristine bushland along the Serpentine River.

This bushland is home to iconic and threatened tree species, like Tuart trees and Banksia woodland and provides important habitat, shelter and food for native birds and wildlife.

Supported by the Peel Harvey Catchment Council through the Alcoa Foundation Serpentine River project and Treemission, National Tree Day is a fun day for the whole family to get out and about in nature.

For more information, visit the City of Mandurah website.

Prepare to be rolling on the floor, clutching at your aching belly from all the laughter that Ross Noble delivers in his new show Humournoid.

Inventive and quirky, Noble is well known for his quick improvising and witty comedy.

For more information or to purchase tickets, visit the MPAC website.

One of Australia's favourite comedians, Kitty Flanagan, is taking to the stage to bring Mandurah her latest stand-up show Smashing.

Algorithms, footy players, harbour porpoises - everything is getting "smashed".

Best known for her appearances on Have You Been Paying Attention?, The Project and The Weekly with Charlie Pickering, Flanagan also plays the role of Rhonda on the award-winning ABC show, Utopia.

This show is strictly for adults only. For more information or to purchase tickets, visit the MPAC website.

The Shire of Serpentine Jarrahdale have confirmed the SJ Community Fair is back for 2019.

There will also be a kids zone sponsored by Bendigo Bank and a youth zone.

For more information, visit the Shire of Serpentine Jarrahdale website.

One of Australia's best-loved stories, The Sapphires, is an energetic and engaging play following four young Yorta Yorta women as they get to the chance to Motown soul hits in an effort to spread joy in the hell that is the Vietnam War.

After winning multiple awards as a play, film and soundtrack album, the show is taking to stages around the country for a national tour of Australia, bringing the fun and emotion of the story to life.

The boy from the bush is back in town! Iconic Australian country music star Lee Kernaghan is hitting the road again for his most extensive tour yet to celebrate the release of his new album Backroad Nation.

Kernaghan will be joined by four-time Golden Guitar winners The Wolfe Brothers and Country Music Channel female artist of the year Christie Lamb for an epic night of original Aussie music.

It is the exhilarating true story about a struggling shoe factory that will lift your spirits to high-heeled heights.

Brought to life by Stray Cats Theatre Company, Kinky Boots follows the story of Charlie Price who has reluctantly inherited his father's shoe factory, which is on the verge of bankruptcy.

Trying to live up to his father's legacy and save his family business, Charlie finds inspiration in the form of a fabulous entertainer in need of some sturdy stilettos, Lola, who helps him to turn the factory around.

Sure to have audiences dancing in the aisle, Kinky Boots is both a moving and powerful story. For more information, or to purchase tickets, visit the MPAC website.

Battle of the Bands grand finale

Brighton Hotel's Battle of the Bands is back!

Running from June 12 every fortnight, the gig offers locals the chance to show this town what they are made of, gain some performance experience and possibly win the cash prize!

Semi-finals will kick off in August with the grand finale to take place in the main bar on September 4.

After launching in 2009, the Dwellingup 100 has quickly become Perth's largest one day mountain bike race.

Perfect for newcomers and novices of all abilities (aged eight and older) as well as some of Australia's most experienced and best riders, the track incorporates the Mighty Jarrah Trail Run.

Mountain bikers and trail runners who take on the challenge of the Dwellingup 100 get to experience the best single track and fire trail the region has to offer. Those competing in the name-sake 100km Classic travel a course carefully curated by mountain biking legend and course director Tony Tucknott.

Yamato - The Drummers of Japan

Following a hugely successful tour in 2017, the Yamato Drummers are back by popular demand to once again leave audiences exhilarated by a new high-energy and explosive show, Passion.

Their acclaimed performances of Japanese Taiko drumming and music have captivated audiences of over 7 million people in 54 countries across the globe.

When a mysterious boy named Peter Pan and his fairy, Tinkerbell, fly into the nursery of the Darling children, an adventure like no other begins.

Brought to life by Stray Cats Theatre Company, audiences will join Wendy, John and Michael as they are spirited away to Neverland, where an ongoing war between Peter and his mischievous gang of Lost Boys and the evil pirate Captain Hook is taking place.