Kyle Middleton was 17 when he joined the army. Three-and-a-half years later he left broken.

"The army took away my best friend from me," he said.

Daniel, the best mate Kyle is referring to, died by suicide while serving in the armed forces. It left Kyle with significant mental health problems which he says were not addressed during his time in the army.

In the five years since leaving the armed forces he has found himself living on the street, unable to cope.

"They let me suffer by myself for years. I was living on the streets, but I couldn't function. The mental health problems were just horrid," he said.

"They walked me out to the front gate and then off you go. As soon as you are discharged they don't give two shits."

Kyle, who now lives on Tasmania's north-west coast, said it took a suicide attempt for the Department of Veterans' Affairs to get him the help he needed.

Now he is adding his voice to a growing list of people calling for a royal commission into veteran suicides in Australia. 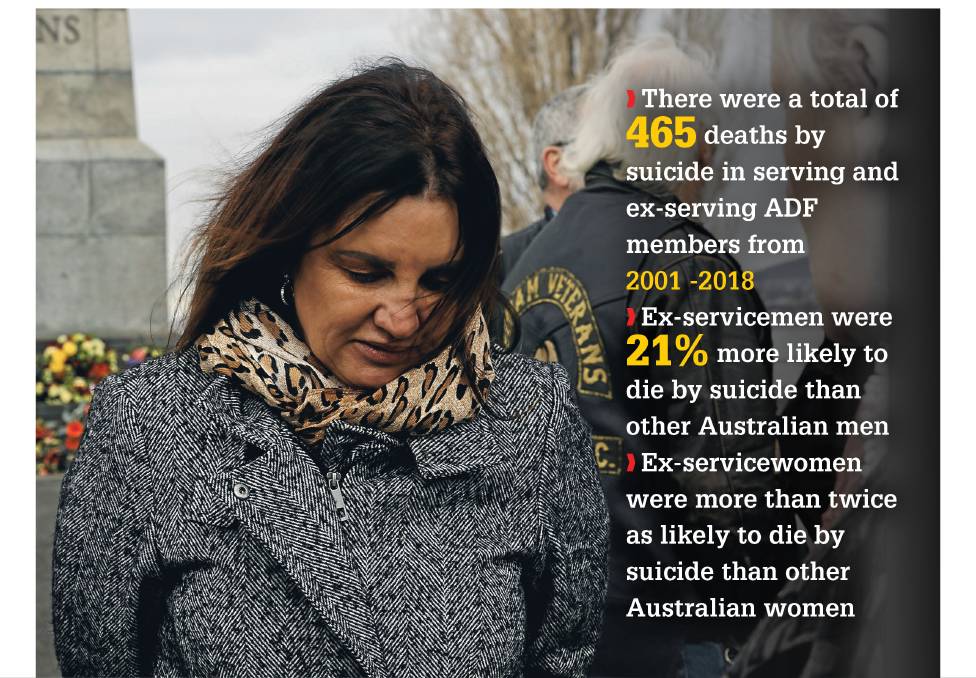 Nikki Jamieson, Daniel's mother, is also adding her voice to the call. She said the death of her son completely changed her life.

"Devastating doesn't even begin to cover how difficult it is to lose a child," Ms Jamieson said. "It is the worst possible grief anyone can ever encounter."

After Daniel's death Ms Jamieson learnt everything she could about suicide, and veteran suicide in particular.

She is now a qualified suicidologist - someone who specialises in the study of suicide behaviour - and is working on a PhD at the University of New England.

Ms Jamieson believes there is a culture problem in the Australian Defence Force and Department of Veterans' Affairs when it comes to the handling of mental health.

"There has been some changes and some improvements, but all of my participants came to my research because of the horrendous experiences [they had] within Defence and DVA," she said.

"If Defence took a bit more of an early intervention approach when it came to mental health, I guarantee you DVA would have a lot less people requiring their support."

"The whole argument for a royal commission is to allow veterans to actually tell their stories and not be overpowered by these systems that have been designed to keep them quite silent," she said.

"There are far too many stories that I have heard that have been swept under the rug. A national commissioner would have been a welcome compliment to a list of recommendations that would have come out of the royal commission anyway.

"But what Scott Morrison has done ... is he has completely removed the veterans' voice from this. He has completely overstepped the mark and put the cart before the horse."

However, independent Tasmanian senator Jacqui Lambie is not convinced. She has accused the government of trying to cover up the issue. Senator Lambie said the government had given her assurances that no serving member of the ADF would be chosen as the national commissioner.

Dr Bernadette Boss CSC was chosen by the government for the role earlier this year. Dr Boss has worked as a magistrate and coroner in the ACT, holds a PhD in Law from the University of Sydney and has filled command roles within the ADF.

A spokesperson for the Prime Minister's office said no assurances had been given to the Senator Lambie.

But Senator Lambie said without a royal commission veterans wouldn't be able to have their say on what is wrong with the system.

She said culture problems within DVA were contributing to the number of veterans dying by suicide.

"These guys are waiting, now, three months to see even people at Opens Arms [veterans and family counselling] or waiting until next February to be able to see a psychiatrist," she said.

"I don't understand when it has had so many years to clean itself up ... why it can't get this right. Then you've got the Productivity Commission's report, which it has taken the government to give out some recommendations.

The Productivity Commission report into compensation and rehabilitation for veterans was tabled in Parliament in July last year.

It described Australia's system for supporting veterans as broken and made 69 recommendations on how to fix it. As part of the most recent budget the government committed to implementing 25 of the recommendations.

In response to questions about a culture problem, Veterans' Affairs and Defence Personnel Minister Darren Chester said that time in the armed forces was a positive experience for the majority of people who choose to serve.

He said both he and the department were open to working with Senator Lambie on veterans issues and had done so in the past.

"DVA has specially trained and qualified staff on hand to support our most vulnerable veterans, including those with complex mental health concerns or those transitioning from the ADF on medical grounds," Mr Chester said.

"Over successive budgets we have invested, improved and simplified the processes in the Departments of Defence and Veterans' Affairs, and will continue to do so.

"This has included introducing free, lifetime mental health care for anyone who has served a single day in the ADF, access to treatment and financial support while claims are being processed ... funding for this support is uncapped and needs-based."

Mr Chester said the government had listened to veterans and their families and understood that suicide was a complex issue which deserves an ongoing focus.

He said the national commissioner approach had broad support from peak mental health and ex-service organisations.

"The national commissioner offers a truly independent and enduring institution to inquire into and help us understand suicide in the ADF and veteran community," Mr Chester said.

"Unlike a royal commission, which is a point in time inquiry, the national commissioner will provide permanent scrutiny of the support provided to our ADF and veterans ... importantly it provides accountability to the Parliament, to the public and most importantly to the families and loved ones who've been affected by suicide."

A spokesperson for the Defence Department said the mental health and wellbeing of soldiers was a priority.

"Defence provides a comprehensive program to support transition to civilian life. Transition programs are designed to prepare ADF members and their families to assume responsibility for their own welfare aspects inclusive of health, social connectivity, meaningful engagement and employment, education, transport, accommodation and finances," the spokesperson said.

"Defence provides transition support to ADF members and their families to support their individual needs, post-transition goals and lifestyles. All members participate in one or more aspects of the transition programs."

The spokesperson said about $53 million was invested each year to provide mental health support, including a range of education and awareness, evidence-based treatment and rehabilitation programs.

"Screening is conducted for all members who have deployed on operations, prior to their return to Australia and three to six months post return, and is available following critical incidents."

Tasmanian Greens Senator Peter Whish-Wilson said the party would support the call for a royal commission.

"This is a most serious matter and must be addressed," he said.

"When we consider the cost of war and deployments on Australian defence personnel, we must all be aware of the mental scars that this service brings, often with sad and devastating consequences."

"The evidence is overwhelming that only a full Royal Commission with a clear start and end date will be able to investigate why so many defence veterans are taking their own lives, and determine what measures are needed to stop these tragic deaths," she said.

This story Defence Force has a mental health 'culture problem' first appeared on The Advocate.