For the past six months Soares Fatima Oliveria has been stuck in Tasmania. The COVID-19 pandemic left him with the difficult choice of returning home, or staying in Australia to work.

Soares is one of many seasonal workers who were left in this position. Luckily for him he had his wife, Brigida Rodrigues, here in Australia with him. They were also lucky enough to be working on the same farm where they met two years ago.

The pair had been inseparable since meeting at Mountford Berries. Neither knew the other in their home country of Timor-Leste and both were one of the few people picked to come to Australia. Every year only about 1000 people are chosen from Timor-Leste to come to work in Australia out of about 20,000 applicants.

Soares and Brigida both decided to ride out the pandemic in Australia. It would give them the chance to earn some extra money to support family back home. But, recently Brigida was forced to return to Timor after falling pregnant.

In Timor-Leste it is tradition for both parents to return home after the woman becomes pregnant. But for Soares returning home wasn't an option. He had come to Australia in order to support his family after the passing of his father. Now with a child of his own on the way he made the tough decision to stay in Australia, while Brigida returned home. 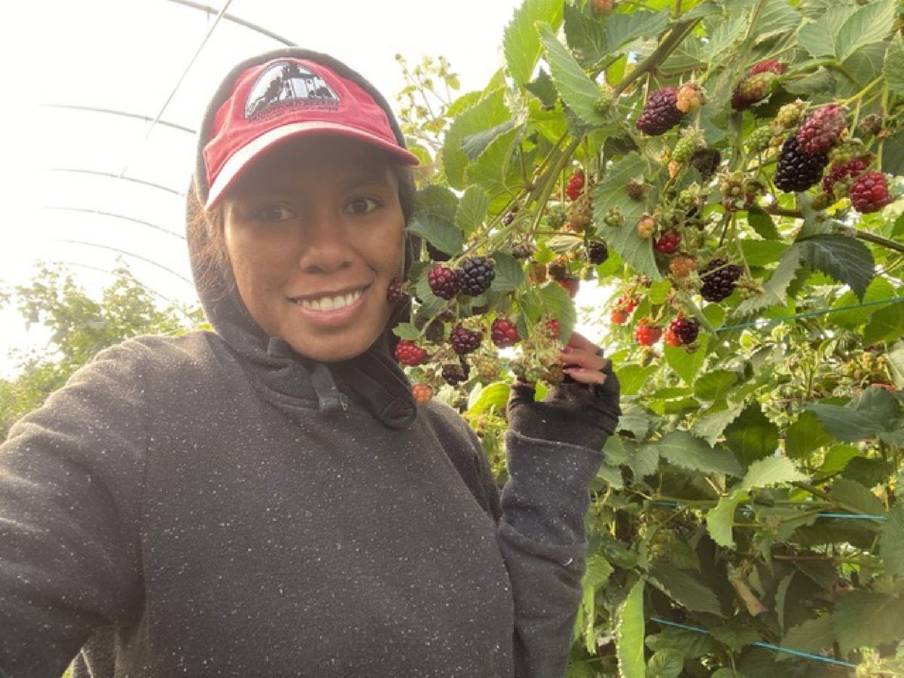 "My mum said 'no you don't have to go', but I said 'mum I have to go because now I am responsible for all of the family'," Soares said.

"We have six people [in the family] and all of them are still young and they all need to study and who will pay for that?"

The money Soares has made in two years picking fruit in Australia has gone to supporting his younger siblings in getting an education. He has also been able to build a house for his mother and is in the process of building a family home for his wife and future children.

Soares said he had also built about six units which he rents out in order to make money when he is not in Australia picking fruit.

He said he was scared that if he had returned to Timor with his wife then he wouldn't of been able to return to Australia next season to make money.

"I was scared [about not being able to come back to earn more money]," he said.

Returning to Timor also would have meant leaving Mountford Berries - the farm that Soares has been working on since coming to Australia two years ago.

That option didn't really appeal to Soares who had formed a strong bond with the farm's management and the surrounding community.

"This farm is like my family here. I love this farm," he said.

Usually seasonal workers, like Soares, must return home for at least three months in between seasons. But the COVID-19 pandemic meant many were left stranded in Australia.

Mountford Berries relies on a seasonal workforce of about 60 people who were on site when the pandemic hit. The farm acts as the visa sponsor for the workers and is therefore responsible for them once they are in Australia.

Seasonal workers program manager Jemma Mackinnon said they worked with other farms across the North to relocate people to the mainland.

She said most of their workers were able to be placed on farms in mainland Australia where they worked throughout the lockdown period.

"During COVID borders all shut down and flights back to their home countries were either non-existent or very limited," Mackinnon said.

Mackinnon said although the workers missed their families, the pandemic had provided them with the opportunity to earn three years wages in just 18 months. 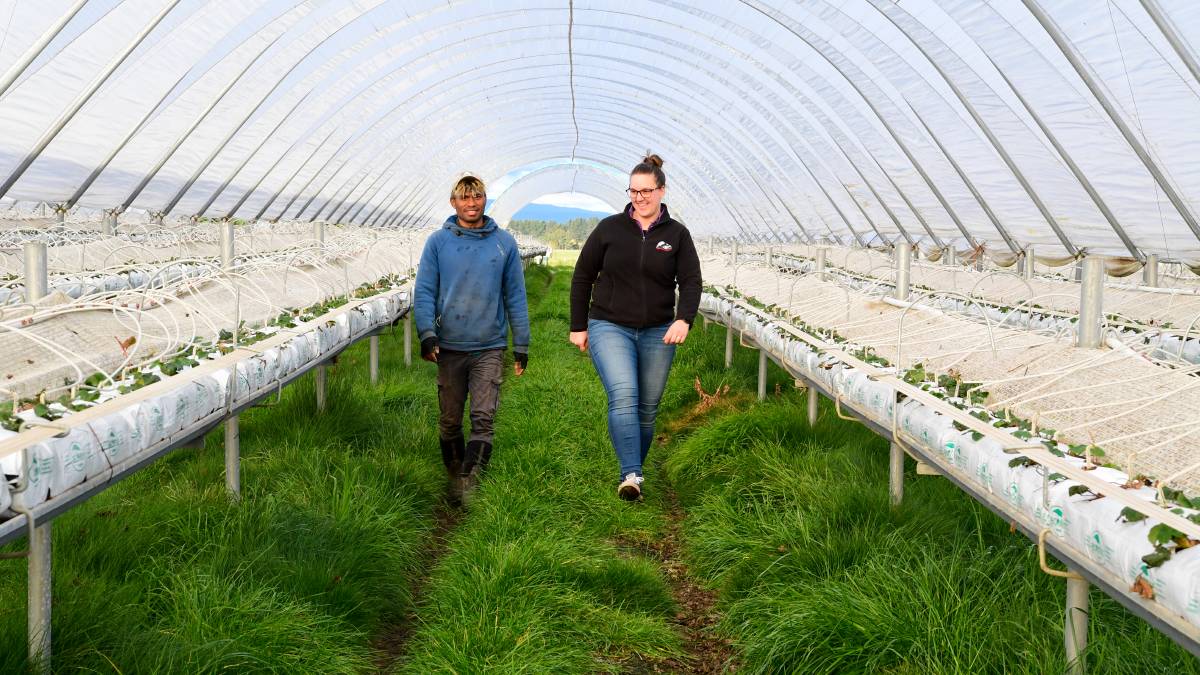 She said seasonal workers were crucial to farms across Tasmania.

"They are a reliable return workforce for us. They come back to Tasmania every season, some of them have been us for three years," Mackinnon said.

"We get that consistency of knowing that our labour is going to be here which has allowed us to grow our business and put on more local workers."

Although Soares is the only worker from Timor-Leste left at Mountford Berries he is far from alone. The farm's management and the greater Launceston community have rallied around him to ensure he is not isolated from the outside world.

While Soares misses his family the extended stay has allowed him to earn money in order to provide for his siblings and his future children. He said being stuck in Tasmania has had it's challenges, but he has tried to look for the silver lining.

"Sometimes it is bad for me [being stuck here because] I can't go [back] to Timor to meet family, but sometimes it is good for me to earn more money," Soares said.

Soares described the berry farm as his home away from home. He said the workers of the farm and members of the community had become his Tasmanian family during the lockdown.

One very important member of that new family is Denise Talbot. Denise first got involved with the seasonal workers in Tasmania through the Kings Meadows Catholic Parish.

After receiving a grant from the Sister's of Quite Mercy last year Denise organised a welcome party for the seasonal workers.

The party was held on the village green in November last year and aimed to create a genuine bond between the community and the seasonal workers.

"We found that [the seasonal workers would] come to church and people would say hello but because we don't speak Tetun [and they don't speak] English it made it hard," Denise said.

"We had about 300 people [at the welcome party] and we actually won the Northern Midlands community event of the year on Australia Day."

Throughout this year Denise has stepped up her involvement with seasonal workers. She took it upon herself to organise a clothing drive after learning they would be stuck here through winter.

"They feel the cold even in summer so through the parish we had a drive for warm clothing and we were just inundated with warm clothes it was incredible," she said.

"From there a lot of them got redeployed to the mainland so there is only a few of them left here.

"We have been watching out for Soares and the girls."

Denise and her husband have made a point of inviting Soares, and the other season workers, over for dinner. Denise said it was nice to be able to offer them a nice warm meal and some company even if it was difficult to communicate.

Soares in particular often joins Denise and her husband at the bowls club for dinner and drinks. "[We are] just starting to get a sense of community for these people," Denise said.

"The last couple of Friday nights when we go for drinks and a meal we've taken Soares with us.

"That is making more people more aware of him being here and the thing is too he needs to get out into the community so he can practice his English."

Denise said it had always been in her nature to ensure people were being included throughout society. She said it was important to her that the seasonal workers felt at home while they were in Tasmania.

"We all like to feel included and loved and looked after," she said.

"I guess it just comes naturally with me that I want people to feel included, and respected and just to care for these people.

"I've lived away from home earlier in my life because I was a teacher. I've taught all around the state and I know what it is like to go to a strange place and to be there and you don't know anyone and you've got to make friends."

Denise has obviously made a positive impact on the workers, who are an essential part of Tasmania's agricultural industry, through her work to include them in the community.

"In our culture we call older people mum and father," Soares said.

Denise said it filled her with joy to see Soares open up and accept them as his Tasmanian family. She said she was happy to help Soares, and the other workers, in any way she could.

Denise said Soares had recently called her for help in sending money back to his real mother in Timor.

"I got a message the other day - he needed to send money home to his mother," Ms Talbot said.

"At 4.30 in the afternoon I get a message 'hello mum I need help, I need send money, I want to send money' and it is spelt as wont [sic].

"So I had to quickly come over and collect him and we made it to the post office at Kings Meadows with about three minutes to spare I think.

"Just to be able to do those things and for him to feel comfortable that he can comes and ask, and he can just come and be apart of our lives [feels good]."

For Soares, and other workers like him, the future is unclear. Nobody knows how long they will be stuck in Australia or how long they will be kept out if they return home. But, while uncertainty lingers over all involved Soares is happy to be stuck with his second family making money to support his family back home.

This story How a seasonal worker found a new home in Tasmania first appeared on The Examiner.