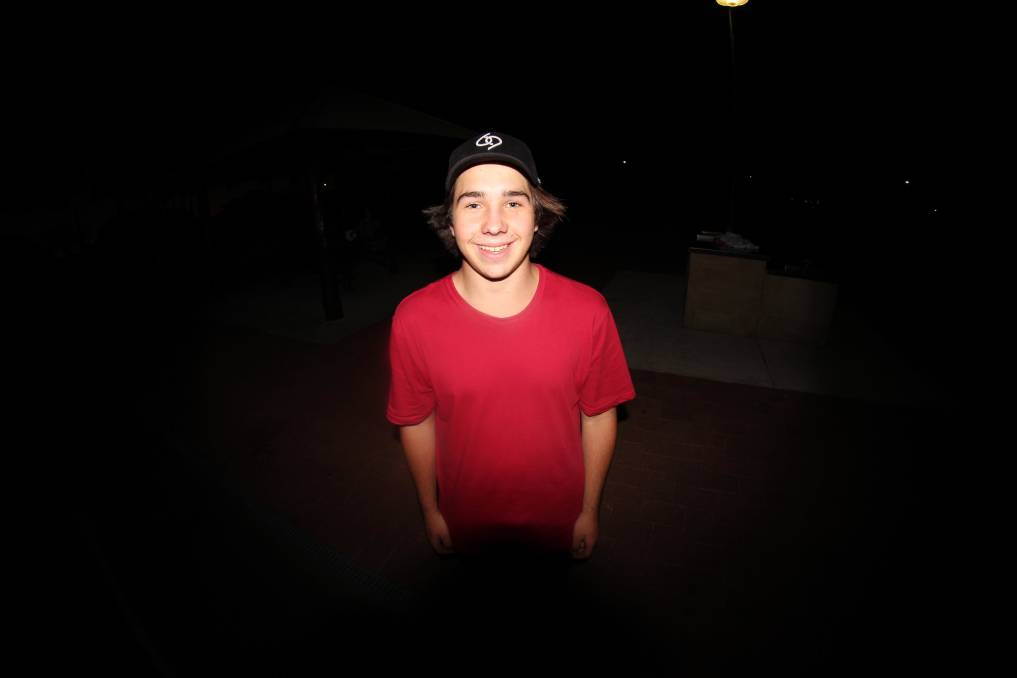 Wilder Rowe is a shining star in the Mandurah community with an impressive resume of leading community youth programs, managing events and filming and photographing local festivals.

To boot, the 17-year-old also has a humble personality and the drive to just get on with the job at hand - or in his case, many of the jobs at hand that he takes on to keep himself busy.

Wilder and I met for the first time in a little cafe, and after our 30 minute chat, I walked away feeling motivated to do more. To be better.

He has an aura of inspiration about him, constantly committing himself to new projects and coming up with bright and fresh ideas to make Mandurah an even more incredible place to live.

Wilder is the latest profile in the Mandurah Millennials on a Mission series, as we meet the young people from around the region helping to shape a new narrative. After spending the first five years of his life growing up in the small country town of Wagin, Wilder's family moved to Pinjarra and then into Mandurah.

The youngster got his first taste of public service at just 11 years old as a City of Mandurah junior councillor - a role he said sparked his interest and led to his position as a Youth on Leadership camp leader.

"That set up everything I do now and inspired all of my involvement in the community," Wilder said.

"I've been doing that camp for about five years and that has been one of the biggest pathways for me."

Midway through year 9, Wilder found himself wanting to spend more time on community events and volunteering than he did at school.

He explained to me how the education system just didn't work for him, so he bucked the trend and left.

"I'm not a genius - I'm socially smart and street smart - but I wasn't failing school or struggling. The structure just didn't work for me so it wasn't a hard decision to leave," Wilder said.

"I dropped out of high school in year nine and was technically home schooled but I was mostly focused on the volunteering stuff.

"I've essentially left school now but I'm working on a Certificate III in business which will allow me to graduate."

So what did Wilder spend all those years doing when he wasn't learning in a traditional classroom?

It's hard to sum up the sheer volume of community work the teenager has contributed to over the years but I'll try to keep it short and sweet.

We already know he helps to organise and lead Mandurah's Youth on Leadership camps but he also volunteers every year for the Mandurah Rotary Club's annual duck race.

He is a part of the Making Waves youth advisory group based out of the Billy Dower Youth Centre and, through that, helped to organise Mandurah's first ever youth forum and the Beats Under the Bridge parties.

He was one of three main organisers of the inaugural You Are Youth Festival in 2019 and helped to bring Mandurah's first film festival, the Take1 Youth Screen Fest, to life.

He has been a part of local environmental and youth alcohol campaigns, worked on social media for Scott's Garage, filmed advertisements and photographed events - all while working at Mandurah Boat Hire. 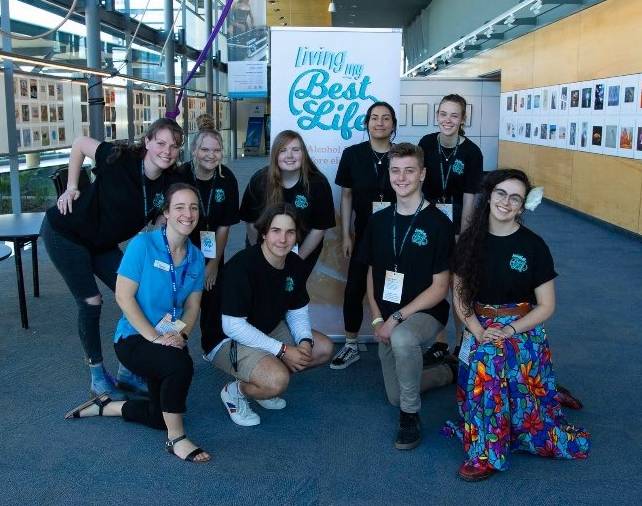 Wilder and the team behind the 'Living My Best Life' youth alcohol campaign launched in Mandurah last year. Photo: Supplied.

But, Wilder said his greatest achievement has been his many hundreds of hours volunteering for the Youth on Health Festival (YOH Fest).

"YOH Fest has probably been the biggest thing I've done in the last few years," he said.

"I've never had much interest in the performing arts but YOH Fest has changed that - it started as a thing to get out of school and have a bit of fun but it turned into a passion.

"Last year alone I did more than 200 hours of volunteering with YOH Fest travelling to the regional heats with them every single day that they were on, photographing and filming all of the performances and then editing them into videos each night to show to parents.

"Plus there's the other four years of YOH Fest which I don't know how many hours I've done for that but I know it's a lot of time."

Awarded for his dedication

Wilder looks around nervously after I ask him about his many awards recognising his talent and commitment to volunteering.

But, I'm a journalist so I keep prying until he tells me more.

"Okay, it was nice to be recgonised and pretty cool to have something to show for everything I've done the past few years," he laughed.

"It does almost contradict what volunteering is though - you do it without payment or reward." Mandurah mayor Rhys Williams with Wilder after he won the 2019 Peel Young Volunteer of the Year award. Photo: Supplied.

Already highly decorated for his young age, among Wilder's greatest awards is the Peel Bright Minds' social media winner and the 2019 Peel Young Volunteer of the Year Award.

"The Volunteer of the Year was a big thing for me personally," he said.

"I really wasn't expecting my name to be called out but when it did I was so excited - it's nice to see how far I've come."

He also works as a photographer and videographer, currently trying to build up his own business using those skills and championing Mandurah at every opportunity through his films and images.

In 2019, he won $500 in funding for his pitch to make a short film about all the good stories of Mandurah.

"I'm still working on that because I was hoping to win the grand prize of $2000 but I lost three-quarters of my budget," Wilder said.

"Now I'm trying to see what I can do with the money I have or find out where I can get more money to document those good stories.

"There's this stigma about Mandurah, especially our youth, so the idea for the film was born from that.

"I got a lot of support for it online so now I'm meeting new people, working out the stories to tell. I'd like to have it done by the end of the year but I want to take my time and do it properly."

Wilder said there was so much he loved about our seaside city.

"No matter where you go, everyone usually has a smile because the people here are so friendly," he said.

"There a lot of bad stories that loom around Mandurah but those issues exist in every other city too.

"Nowhere is perfect, nowhere ever will be, but I think Mandurah is almost spot on."

During our chat, Wilder drops the names of plenty of local legends who he said helped him get to where he is today.

But with plenty of real world experience and a strong head on his shoulders, Wilder has developed some impressive advice of his own.

Remember why you do what you do and don't let other people's opinions get in the way of that.

"You're always going to meet people that want to be the walls in your way that you have to break down," he said.

"Remember why you do what you do and don't let other people's opinions get in the way of that.

"You can always listen to what people have to say because different perspectives are important.

"But whatever you're motivated towards, just don't stop. Don't second guess it, don't doubt yourself. Just find your passion and pursue it."

Plans for the future

"What's next?" I ask Wilder as I sip the last of my coffee and our interview starts to come to an end.

"I've got no idea. I've never been a kid that plans what I want to do," he said.

Yet what he said next would definitely imply he knows what he wants and he's going after it with both hands.

"I want to run for North Ward council when I'm 18 and then run for mayor in 2026," Wilder continued.

I shook my head in shock but also in agreement - this is the kind of person that could make some waves in local government.

Obviously we've had young councillors in the past and we have some now but I don't think it's a bad thing to have more because there is never enough representation for the big youth population we have.

"It's been my goal for a while to get into council and show them how things should be done and that's turned into something I'm really passionate about and something I want to work hard towards," he said.

"I'm 17 now so I have a year to start planning what I'm going to do and I've already got a bit of an idea for my election campaign.

"Obviously we've had young councillors in the past and we have some now but I don't think it's a bad thing to have more because there is never enough representation for the big youth population we have.

"Apart from that, I really don't have a clue what I want to do but I could go down the photography and videography pathway or events management or my own business. Who knows."

Whatever he decides to do, we know Wilder's future is bright and Mandurah will be a better place because of his continued commitment to the community.

Got a Mandurah Millennial on a Mission you think would be great to profile in this series? Email k.meerton@mandurahmail.com.au.