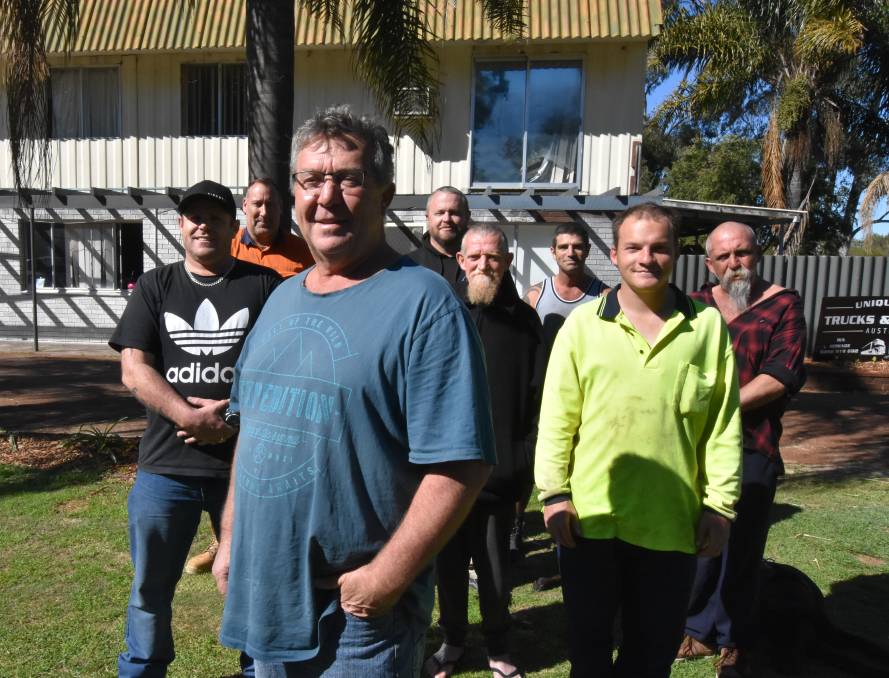 Squared Away started 12 months ago, offering accommodation, support and guidance to men in the Peel region.

The headquarters is an old two-storey building located on a five-acre block with a therapy horse, chickens and abundant space for residents to kick a football, go for a walk or explore.

The house has three bedrooms, but the organisation oversees three more rentals in Mandurah, sleeping on average 16 men each night.

I get anywhere between 60 and 80 phone calls on the average day and 20 to 40 messages from blokes.

The organisation is run solely by volunteers.

On Thursday, August 15, when the Mandurah Mail was interviewing Squared Away director Craig Waterman, his phone was continuously ringing.

He apologised, before answering every phone call.

I thought it was a bit strange, until Craig explained the phone calls were from men the organisation had previously helped, or was still helping.

"I get anywhere between 60 and 80 phone calls on the average day and 20 to 40 messages from blokes needing advice or help in one way or another," he said.

My goal, most importantly, is to try and stop someone topping themselves.

"That's every single day of the week - it just doesn't stop.

"When men want to talk, you take the call. You can't afford not to answer. If you ask these guys if they've thought of taking their own life, they weren't just having thoughts about it."

Craig said the organisation recently helped a man who was going to take his life the day before.

"One bloke, the day after he came here, we had to take him to Centrelink," he said.

"He said he had to pick up his ID. He directed me to an old abandoned caravan park. He walked under the tree and started looking around.

"I said 'what are you doing?' He said 'I was going to hang myself here yesterday. I put my ID on the ground so they'd know who I was'."

Craig said out of the 300 homeless men who have received help, more than 60 had been housed, 16 were being housed and two men returned to the streets.

Craig said he was shocked to learn the substantial volume of homeless men requiring assistance in the Peel region.

"There's a lot of blokes in outlying communities like Waroona, Pinjarra and Dwellingup who are couch surfing and living in sheds," he said.

"They're lost and have nowhere to go. We didn't realise how vital the service was until we started working in it."

Men entering the house must be drug-free and consuming alcohol is limited to a Friday night beer around the bonfire.

"They have to choose to be clean when they come in here," he said.

"We need to work with fellas that want to move forward. If families try and force them, it doesn't work."

"You won't get blokes going into clinical situations off their own back," he said.

"They just don't do it. I actually walk with them and sit with them in those first appointments."

Craig said the organisation aimed to get men back on their feet.

"We need to get them here and restarted back in life," he said.

"Sometimes it can take a week, sometimes six months.

"We've had a guy for five months who is unwell with depression and anxiety, but we'll get him better - everyone has their own pace.

Craig said the framework was having success.

"Before you know it, these guys have each others back and end up moving out together and supporting each other through their issues and they can talk openly because they understand each other," he said.

"It's important to get guys moving forward or it becomes welfare."

Craig said they worked with local organisations including Mandurah Police.

"The local police rang me yesterday, they had a family violence restraining order (FVRO) situation," he said.

"We were able to house that bloke 20 minutes after they escorted him from the property.

"Instead of him being out on the streets or going to a hotel and spending money he doesn't have, he has a roof over his head and food in the fridge."

Craig said 50 to 60 per cent of the men they housed had a FVRO against them.

"They can stop and take a breath and think 'what just happened in my life?'" he said.

"The key to what we're trying to do is repair broken men, so we can repair families.

"We're not necessarily going to put the families back together but it's good for co-parenting.

"It's all about the kids, making sure they have good dads again and not just a broken man, living in someone's back shed, with his head in his hands wondering what the hell happened to his life.

"They might like to lay blame when they first get here, but by the time they leave they're taking responsibility for their part in it and they can see the whole picture and not just part of the picture."

Craig, an electrician by trade and former business owner, started the organisation after experiencing his own mental health issues and marriage breakdown.

He noticed there was limited transitional accommodation for men in the Peel region.

"There's a lot of people out there who have learnt it in a book but never lived it," he said.

Craig said he worked 60 to 80 hour weeks at the centre.

He said volunteer Linda Rees-Mogg was an NDIS coordinator with mental health and community service qualifications.

Volunteer Eric Jensen said his specialty was helping men who were homeless after receiving a FVRO.

"My goal, most importantly, is to try and stop someone topping themselves," he said.

"To seek out blokes who have a FVRO put on them suddenly and they think there is nothing left for them.

"They think there is no light at the end of the tunnel. I try and grab those guys as quick as I can and let them know there is a chance for them."

Eric said he became homeless after his relationship broke down.

"I moved into my martial arts gym and lived out of a swag for three months," he said.

Family problems left Squared Away resident Chris White homeless, before he was referred by Centrelink to the organisation.

"I was homeless for well over three months in Mandurah's CBD," he said.

"I was living in other people's joints, out on the street, near the forum, tenting, all sorts of different places.

"I wandered into Centrelink one day and said I was pretty tired of being on the streets."

Chris described the experience as "terrible" and he was constantly concerned for his safety.

"You never know what's going on and it's not safe," he said.

"Rain and miserable nights aren't fun because everything is drenched and you're carting around wet clothes. "I've recently gained employment with Northend Pavers and it's been alright since. I move into my own place tomorrow. It's helped me get on my own feet."

Craig said the organisation received donations from various community organisations but he was hoping to receive funding from the government in the future to house more men.

"If they recognised the size of the men's mental health problem then they're going to have to fund it," he said.