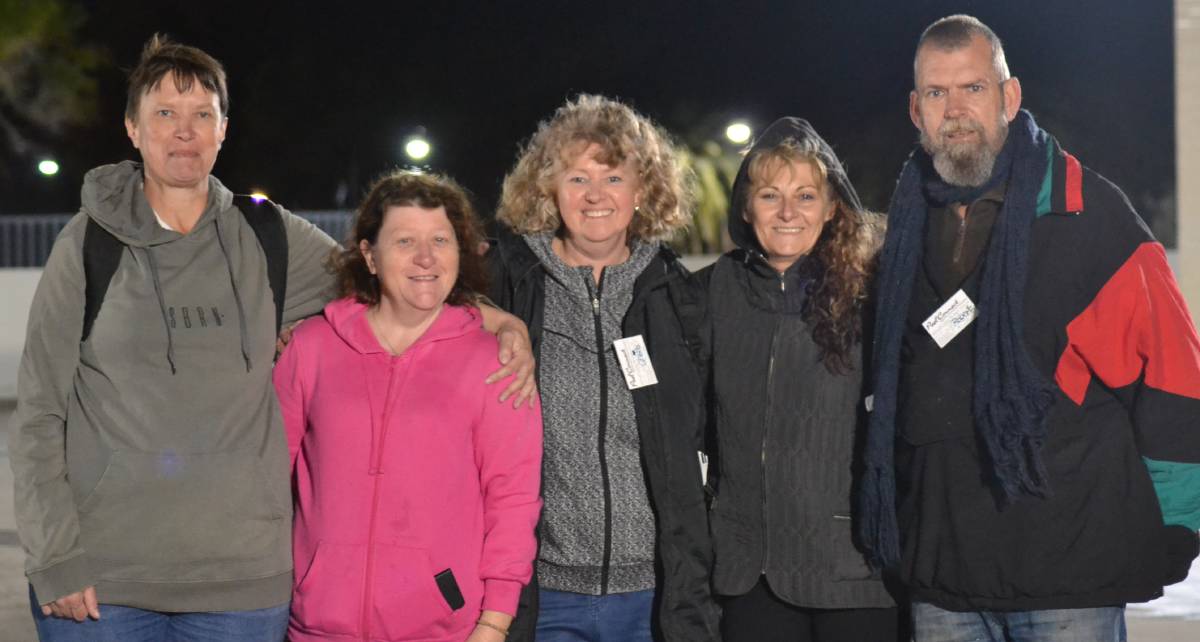 Mandurah homelessness support workers have spoken out about the heartbreaking scenarios they regularly witness, which have included a crying four-year-old child and father sleeping rough at the foreshore, and a pregnant 12-year-old in despair.

I met five volunteers at Woolworths downtown, before we set off towards the Eastern Foreshore with blankets, toiletries, clothing, hot coffee and soup.

Jenny Marcinkus, who has been homeless herself, led the charge. At her worst, she was living out of a car with her children.

I got told by one of our homeless guys that Manduah is the new holiday spot for homeless.

Ms Marcinkus said it was rewarding to help others.

"The biggest thing for me is how grateful they are for just that tiny bit of interaction with other people," she said.

"Most people don't see them, and if they do, they are judging them.

"We are here to have a bit of a conversation with them, if they're up for it. If they're not up for it, we just leave them alone."

The regular clients gave Ms Marcinkus permission for me to join the group on Saturday and ask questions about their experiences.

We approached Russ, who usually sleeps on Sutton Street near the soup kitchen, or near the toilet block at the Eastern Foreshore.

On that night he was near the toilets, with a blanket, old mattress and a few personal items tucked up behind him.

I instantly felt ashamed. I had been complaining about the cold wind 10 minutes earlier, but I had a warm house to go home to, just two minutes drive down the road.

Russ had to sleep out there alone. Ms Marcinkus said they did not offer the service when it was raining, because the volunteers have to look after their health.

Tragically, Russ doesn't have an option.

'It just broke my heart'

The volunteers greeted Russ and made him some coffee and soup.

Russ said he became homeless due to a legal battle. He wasn't in a talkative mood on the night.

I guessed he was a bit overwhelmed as I was a newcomer asking him questions.

Ms Marcinkus said it takes a long time to gain their trust.

"A lot of them don't want to talk to people," she said.

"We are trying to build relationships with them so they know what we're about. They have come to expect us to be out now and look forward to seeing us, which is wonderful."

Ms Marcinkus said they approached a homeless man, two weeks earlier, who had a child that looked about four years old.

"The little boy was crying and upset - it just broke my heart," she said.

"We asked the man if he needed help but he said no, and that he was waiting for somebody, but clearly he wasn't.

"They were only sleeping here for a couple of days - I don't know where they've moved on. It's very hard to walk away, especially when little kids are involved."

Ms Marcinkus said they assisted a young girl recently who was kicked out of home by her drug-addicted mother.

"We see young people in their early teens," she said. "A young girl was by the cinemas with her dog.

"Because she had her dog with her, she wasn't accepted into housing. It's really hard for them if they have pets to find a place to stay."

She said they offered their services to any homeless person, no matter how or why they ended up in the devastating situation.

We visited another man, Bondy, who was over the moon to see the group and greeted them with hugs.

The volunteers, who have developed a close relationship with Bondy, chatted with him for well over half an hour, catching up on the latest in his life.

Ms Marcinkus said they struggled to help a large number of people because they were so transient.

"I've been told there's about 280 homeless people in Mandurah," she said.

"I don't think we've come across that many and that's because they are living in squats.

"Even though it's an abandoned building, we still can't go on the premise because it's private property, which is a bit of a shame.

"There are places they do hang out, but they're not always there and sometimes they rotate where they go."

Ms Marcinkus said local homeless people loyally looked out for each other.

"There is lots of in-fighting, like with any group of people, but they're very protective of each other," she said.

"Even though we are out here trying to help them, they won't tell us where their friends are or give away their locations."

Ms Marcinkus said Peel Connect, which offers the service on Wednesday and Saturdays, were hamstrung by the number of volunteers they had.

"My hope is to have enough people to go out every night," he said.

"Homeless people are not just homeless on a Wednesday and a Saturday."

Halo supports the vulnerable people of Mandurah by providing a soup kitchen on the weekends, a transitional homeless shelter and support service.

"We have young teenagers seeking help who have been kicked out of home or have been abused.

She said volunteers were shocked to learn how many people are homeless or "barely holding on to their house".

Ms Freitag said the local organisation had a "massive" client base.

"At the soup kitchen we get about 120 people a day on weekends and public holidays," she said.

"In winter we usually get 80 to 100, but that will go back up as soon as summer comes back.

"I got told by one of our homeless guys that Manduah is the new holiday spot for homeless."

Ms Freitag said there were not as many homeless people in Mandurah in the winter months.

"They usually try and find accommodation or do something to get themselves in jail," she said.

She said there needed to be more shelter accommodation options in Mandurah, but to do that, the existing agencies must collaborate.