Less than four months in and 2019 is already off to a tragic start on the roads with the second-highest number of fatalities to the date in the past decade.

Fifty-one people have been killed on Western Australian roads so far this year - almost one death every two days.

Alarmingly, 27 of those deaths occurred on regional roads.

So far this year, the South West region alone, bounded in the north by the City of Mandurah and Shire of Murray down to the Shire of Manjimup, has seen eight fatal crashes.

These arent just numbers, these are all people with families who are now grieving the unexpected loss of a loved one.

On February 28, a 30-year-old man was killed in a crash along Mungulup Road near Collie after the car he was driving left the road and struck a large embankment.

About 10.50pm, the car rolled several times causing the driver to be ejected from the vehicle. He received critical injuries and died at the scene.

Just days earlier on February 23, a 41-year-old man died after his Harley Davidson crashed near the intersection of Corio Road and Venn Road in Ravenswood.

Road trauma, whether they be fatalities or serious injuries, have a ripple affect on the community.

The loss of a highly respected member of the WA basketball community and father-of-two Anthony Exeter sent shockwaves through much of the state after a freak road accident claimed his life in January.

Mr Exeter was driving on Bussell Highway near Ludlow with his wife and two children when a boat canopy from the vehicle in front detached and went through his windscreen.

He was flown by the RAC Rescue helicopter to Royal Perth Hospital but suffered catastrophic brain damage and passed away on Sunday evening after his life support was turned off. 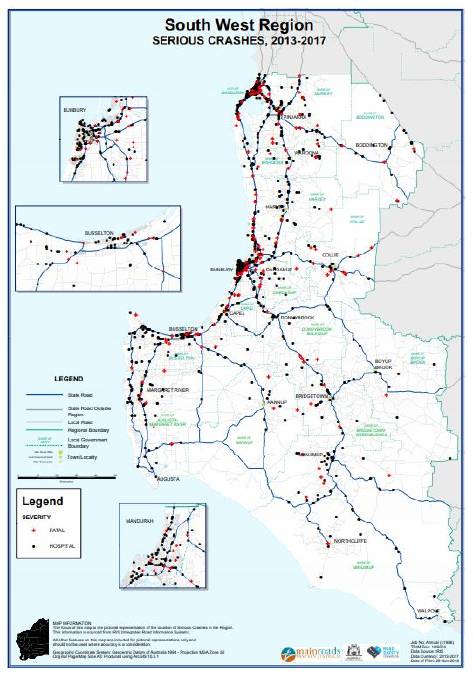 Every year motorists are reminded to "drive safely" by authorities, but still the numbers climb - this year marking a significant spike in the road toll.

"These arent just numbers, these are all people with families who are now grieving the unexpected loss of a loved one," he said.

Mr Cameron said, unfortunately, the most common kind of serious crash on regional roads were single vehicles running off the side of the road.

"The majority of these crashes are most likely to involve distraction, inattention, driving tired while speeding and drink and drug driving are also contributing factors," he said.

"A run off road crash at 100 or 110km/h can result in life-altering injuries or death, while the same crash in the metropolitan area at a speed of 50 or 60 km/h may have lesser consequences for the people involved."

"Risk-taking behaviours such as speeding and drink driving still contribute to road trauma in WA, but about 70 per cent of all serious crashes now involve someone making a mistake such as a momentary lapse in concentration or driving tired.

"We need to avoid complacency, be aware of the role fatigue, inattention and distraction play in road trauma and take the necessary precautions to ensure a safe journey."

In response to the road toll, the WA government has implemented a number of initiatives in an effort to address the disproportionately high road toll in regional areas.

An additional 25 police officers were recruited for the specialist traffic squad, with that number boosted by another 14 again last month.

Road safety minister Michelle Roberts said there are also more police on major country roads than ever before.

"But we need everyone to play their part by considering their own behaviour behind the wheel," she said.

"Road safety is everyones responsibility and if we all make a commitment to drive so others survive, then we can work together to reduce death and injury on our roads and prevent more families experiencing the tragedy of road trauma."

A number of roads in the Peel region and South West have secured funding for improvements as part of a $500 million upgrade of regional roads around the state.

A right turn north acceleration lane will be constructed at a cost of $950,000 at the intersection of Forrest Highway and Hynes Road in the Shire of Dardanup to improve visibility.

Over $500,000 will spent on Pinjarra Williams Road in the Shire of Boddington to widen curves, seal shoulders and install signs and safety barriers.

In WA, 100 per cent of all red light and speed camera infringements go into the Road Trauma Trust Account (RTTA). Those funds are then allocated to improve road safety across the state.

The state government recently allocated $70 million from the RTTA to fund safety treatments and improvements on regional roads where there is a high risk of run off road crashes.

Part of the allocation includes road improvements on Pinjarra Williams Road from Dwellingup to the Shire of Murray boundary.

They also include works east of Dwellingup, such as widening the road pavement, drainage culverts and bitumen sealing, which are expected to be completed by the end of June 2019.

Industry Road Safety Alliance South West project manager Sarah Stanley said it was a tragic reality that 33 lives had already been lost on WA roads in 2019.

The consequences are felt by family, friends and workmates for many years, especially in tight-knit communities like the South West.

"Every serious injury or death on our roads is one too many," she said.

"The consequences are felt by family, friends and workmates for many years, especially in tight-knit communities like the South West."

They act as a conduit of information as well as a road safety advocate that raises awareness about road safety risks and opportunities in an effort to improve road safety outcomes for all users.

Ms Stanley, who is also the Shire of Collie president and has experienced first-hand the tragedy of road fatalities, said her group believed mistakes on the road "shouldnt have to end in serious injury or death".

"Design improvements such as improved intersections, shoulder sealing, median widening and audible edge strips can mean the difference between life and death on regional and remote roads," she said.

"We also aim to educate road users on the consequences of unsafe actions, such as speeding, fatigue and distracted driving, so that everyone can return home safely to their loved ones at the end of every trip."